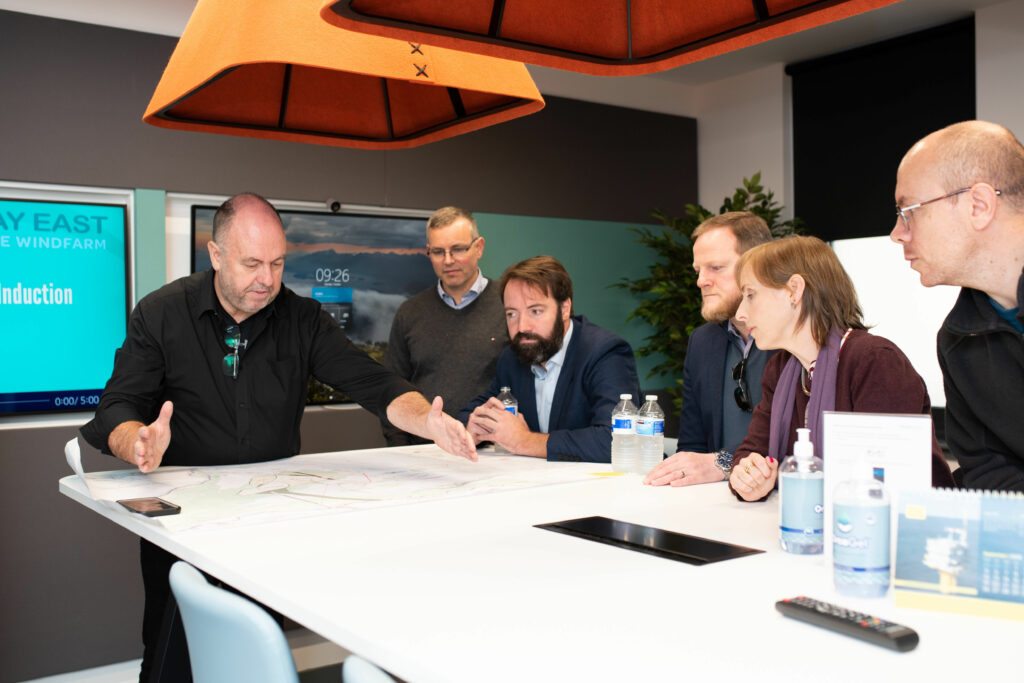 (5th October 2022) Leading international offshore wind energy firm Ocean Winds hosted a fact-finding mission for Irish Oireachtas members to give them a first-hand experience of its operating offshore wind facility in Scotland (Moray East offshore wind farm – 950 MW) and its associated infrastructure. The visit by members of the Joint Committee on Environment and Climate Action comes at a time when the imperative to leverage Ireland’s wind power potential is greater than ever in the context of the increasing impacts of climate change and global fuel insecurity.

Scotland is recognised as a leader in the development of offshore wind energy and the visit offered excellent insights into the optimal approach to wind farm development including the importance of early and meaningful community engagement. The Oireachtas members also heard about the economic and infrastructural benefits of offshore wind farms.

Commenting on the visit Dan Finch, Country Manager for Ocean Winds in Ireland said, “We were delighted to host the members of the Joint Committee on the Environment and Climate Action and give them an in-person tour of the facilities at Fraserburgh, Aberdeenshire, in Scotland. With a total of five offshore wind farms in Scotland, in all stages of project development from operation to development, Ocean Winds is generating low carbon energy to Scotland. We are working on the long term to shape the offshore wind industry in Scotland, and we do so hand in hand with local industry and communities. In Ireland, Ocean Winds has committed itself to developing a long-standing presence and to help support the country’s clean energy ambitions through the development of wind power facilities that can deliver renewable energy to fuel Irish businesses and communities. By reducing Ireland’s reliance on gas and oil it will also help safeguard Irish communities from global energy price fluctuations.”

Brian Leddin TD, Chair of the Joint Committee on Environment and Climate Action commented, “We know that Ireland possesses enormous climatic and geographic advantages when it comes to generating offshore wind energy. The Committee members were delighted to see an offshore wind farm of this nature in full operation, to learn more about the infrastructure unpinning such a development and to understand the community involvement in such projects. It is important to take away some of the Scottish offshore experience as we look forward to the establishment Ireland’s maritime regulator, MARA, next year.”

Ocean Winds entered the Irish wind energy market in 2020 bringing with it over a decade of experience in the development of wind energy facilities across North America, the UK, Europe, and Korea. It is currently working towards the delivery of two offshore projects off the coast of counties Dublin and Wicklow – Réalt na Mara and Celtic Horizon off the coast of counties Waterford and Wexford and by 2030. The combined projects promise to deliver over 2.3 GW of renewable energy to over 2.1 million Irish households.